The Podiatry Cycling Team regrouped to tackle the Murray to Moyne Cycle Relay held on the 2nd and 3rd of April 2016. This event required teams to ride across Victoria, from starting points at either Echuca, Swan Hill or Mildura, to the finish line at Port Fairy, representing a total distance in excess of 520 km to be completed within 24 hours.

The team’s goal was to raise funds for two charities: Walk for Life (WFL), which aims to enable children in Bangladesh born with clubfoot deformity the opportunity to walk, run and play by providing life changing corrective treatment, and the Australian Podiatry Education and Research Fund (APERF), which supports research into the causes, prevention and treatment of foot problems.

Leaving Melbourne on Friday afternoon, the team drove to Echuca on the Murray River and readied themselves for the early Saturday morning start. While the team welcomed the warm weather, not so welcome was the headwind that persisted for the entire first day. Three rotating groups of riders from the team worked solidly out on the roads and, through teamwork and efficient change-overs (helped by our support crew/driver Robert Fenton), were amongst the first teams to reach the Hamilton overnight stop, just after midnight.

After five hours sleep the team’s sore nether regions were back in the saddle for the final 90 kms into Port Fairy where a well-deserved barbeque and cold beer were awaiting. Many riders in the team clocked up more than 300 km individually during the 24 hour event.

Late in our fundraising campaign the team became aware of an incident involving Ballarat based podiatrist Christian Ashby, who sustained life-threatening injuries while riding his bike early on Good Friday around Lake Wendouree. As a team, and with the support of the charity partners, it was decided to donate a portion of the money raised from this event to Christian and his family. I am very pleased to announce that this year the team raised over $14,500, well in excess of the original goal.

Special mention goes to Eleisha Lilley for all of her hard work as co-captain organising the team, and also Artur Maliszewski from Footwork and Mark Dannals from Briggate who have continuously provided unwavering financial and logistical support.

To find out more about the Podiatry Cycling Team, please check out the team’s Facebook page or visit their website.

Auction in support of APERF 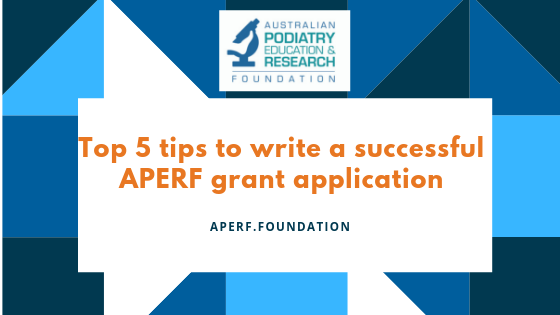 Writing a grant application is hard work. It can be...